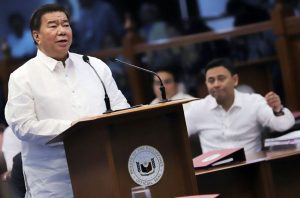 Who gets harmed if ABS-CBN is allowed to continue to operate while the matter is pending in Congress?

Why are we in a hurry to close ABS-CBN?

Senate Minority Leader Franklin Drilon posed these questions in response to the statements made by retired justices, including former Chief Justice Reynato Puno and retired Supreme Court Justice Angelina Sandoval-Gutierrez, that the National Telecommunications Commission (NTC) cannot grant a provisional authority for ABS-CBN to continue to operate without a franchise.

“This issue on ABS-CBN cannot be decided in a vacuum as the retired justices want Congress to do. Our conscience will not allow us to do that, because the reality is, 11,000 jobs are on the line here,” Drilon stressed.

The Supreme Court, according to Drilon, has held in various cases that: “Laws and rules should be interpreted and applied not in a vacuum or in isolated abstraction but in light of surrounding circumstances and attendant facts in order to afford justice to all.”

The former justice secretary said that to interpret it in a very strict legalistic manner in a vacuum like the way the retired justices were doing will cause prejudice to 11,00 workers.

“By their interpretation, we put at risk the livelihood of 11,000 employees and the future of their families, without giving an opportunity for a rational discussion,” he stressed.

Drilon said that there are precedents, and it is on record, where various franchisees were allowed to keep operating with expired franchise pending renewal of their franchise, citing the case of GMA-7, Smart, among others.

There is no harm done if ABS-CBN continues to broadcast while giving time for Congress to passionately look into the franchise renewal of the network, he said.

“Why can we not give Congress more time to decide on this? Is anybody’s interest harmed by the continuation of the operation of ABS-CBN while the matter is pending in Congress?” Drilon asked.

The minority leader said that the opinion of the secretary of justice as the legal counsel of the executive department and the National Telecommunications Commission as the implementing agency in charge of telecommunications should be accorded due weight and consideration.

“The secretary of justice has ruled that there are sufficient equitable grounds to let ABS-CBN to continue broadcasting pending the process of renewal in Congress. There is no harm in letting the NTC to continue its practice of granting a provisional authority as it has done in the past,” Drilon said.