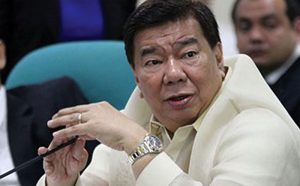 Alarmed by abuses in the implementation of the law, Senate Minority Leader Franklin M. Drilon sought to repeal Section 6 of Republic Act 11469 or the Bayanihan to Heal as One Act that punishes several acts including spread of fake news.

“I have extreme reservations about renewing Section 6 of RA 11469 because of what we have seen as the way it is implemented by those who are in charge. We have seen how law enforcers have used this provision to arrest people for acts which otherwise would not justify arrest without warrants,” said Drilon during a Senate hearing on the possible extension of RA 11469.

“The alleged violators are mostly the poor and vulnerable who are driven by the hunger and the lack of jobs,” he lamented.

Drilon emphasized that the principal purpose of RA 11469 is “to address an emergency and protect the health of our people” and “not to punish a crime per se.”

“We should not criminalize the law.” Philippine National Police Chief Archie Gamboa, who attended the hearing, did not oppose the proposed repeal.

The former justice secretary feared that Section 6 is being used by law enforcers to justify possible abuses, citing, for instance, indiscriminatory arrests without warrants and discriminatory application of the law.

He cited the arrest of Cebu-based artist Maria Victoria Beltran and other netizens as well as the death of a former military officer for allegedly violating quarantine rules.

He also cited cases of abuses that happened in Santa Cruz, Laguna, where five youths were locked up inside a dog cage for violation of quarantine rules and the case of three members of the LGBT community in Mexico, Pampanga, who were ordered to kiss each other and perform “sexy dance” as a way of punishing them.

Section 6 of RA 11469 enumerated several acts considered illegal and are punishable under the act with imprisonment of two months or a fine of not less than P10,000 but not more than P1 million, or both, to be determined by the court.

(2) hospital owners who refuse to operate in accordance with the directive of the President;

(4) refusal to prioritize and accept essential contracts for materials and services;

(7) failure to comply with reasonable limitations on the operation of certain transportation sector.

“Imprisonment is counter-productive. We arrest people for curfew and mass gathering violations, only to place them in overcrowded detention centers where the virus can easily spread. There are least 517 detainees who have contracted the disease,” Drilon said.

Supreme Court Administrator Midas Marquez on Friday said that 22,522 persons deprived of liberty or detainees have been released during the enhanced community quarantine period as a result of 3,201 videoconference hearings conducted by the courts, adding this helps prevent the spread of the virus.

“We should not criminalize the Bayanihan law because its objectives may be achieved without it being punitive,” he added.

Besides, Drilon said some of the crimes cited in Bayanihan law are already punished in other laws.

For instance, the Bayanihan Law punishes those engaged in hoarding, profiteering, injurious speculations, manipulation of prices, product deceptions, and cartels.

The same crimes are punished under Republic Act 7581 or the Price Act, and RA 9502 or the Universally Accessible and Cheaper and Quality Medicines Act.

In the case of individuals or groups creating, perpetuating or spreading false information regarding COVID-19 crisis on social media and other platforms, Drilon said RA 10175 or the Cybercrime Law is applicable.