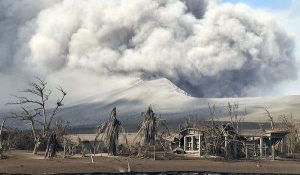 DOST-PHIVOLCS reminds the public that sudden steam-driven and even weak phreatomagmatic explosions, volcanic earthquakes, ashfall, and lethal volcanic gas expulsions can still occur and threaten areas within Taal Volcano Island and nearby lakeshores.

DOST-PHIVOLCS recommends that entry into the Taal Volcano Island as well as into areas over Taal Lake and communities west of the island within a seven (7) km radius from the Main Crater must be strictly prohibited.

Local government units are advised to assess areas outside the seven-kilometer radius for damages and road accessibilities and to strengthen preparedness, contingency and communication measures in case of renewed unrest.

People are also advised to observe precautions due to ground displacement across fissures, frequent ashfall and minor earthquakes.

Communities beside active river channels particularly where ash from the main eruption phase has been thickly deposited should increase vigilance when there is heavy and prolonged rainfall since the ash can be washed away and form lahars along the channels.

Civil aviation authorities must advise pilots to avoid flying close to the volcano as airborne ash and ballistic fragments from sudden explosions and wind-remobilized ash may pose hazards to aircraft.

Activity in the Main Crater in the past 24 hours has been characterized by weak emission of steam-laden plumes 50 to 100 meters tall that drifted southwest.

Sulfur dioxide (SO2) emission was measured at an average of 55 tonnes/day on February 4, 2020.

These earthquakes signify magmatic activity beneath the Taal edifice that could lead to eruptive activity at the Main Crater.

DOST-PHIVOLCS is closely monitoring Taal Volcano’s activity and any new significant development will be immediately communicated to all stakeholders.