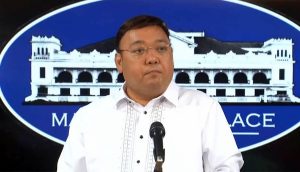 Secretary Roque pointed out that no country is currently engaged in mass testing, and that the use of the term causes confusion among many, with people thinking that everyone should be tested, which is not the case.

The Palace official further explained that since no countries will be able to test all of its citizens, the key to testing is to work on benchmarks.

Roque said that what this means is that only 1 to 2 percent of the population of the entire country will be tested, or in the case of an epicenter, even higher than up to 10 percent.

At ito po ang ating ginagawa,” the President’s spokesman said. On the DOH not requiring COVID-19 testing for returning employees, Secretary Roque confirms that there really is no provision in the DOH guidelines requiring employers to test their employees upon returning to work.

The Presidential Spokesperson added that the expanded target testing per DOH is based on international practice guidelines.

Only individuals who need to be tested will undergo testing.

Secretary Roque also underscored that the country’s testing capacity has grown to 11,127 tests per day as of May 15 from only 5,000 tests daily as of May 2.

“We plan to be able to reach the capacity of doing 30,000 tests a day,” said Sec. Roque, adding that the government has already procured rapid testing kits that were distributed to local government units that do not have existing PCR testing laboratories.