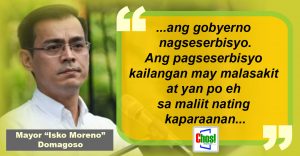 More than 17,000 tricycle and pedicab drivers affected by the COVID-19 crisis in the nation’s capital received food packs and rice assistance from the city government of Manila Manila Mayor Francisco “Isko Moreno” Domagoso said a total of 3,872 pedicab drivers and 13,233 tricycle drivers received the local government’s assistance earlier this week.

Domagoso said the distribution was carried out by the Manila Traffic and Parking Bureau (MTPB).

Domagoso said that the transport sector was among the first ones affected by the strict implementation of the Enhanced Community Quarantine in Metro Manila.

The food assistance was on top of the P1,000 cash aid being provided by the city government under the City Amelioration Crisis Assistance Fund.

DILG to LGUs on Undas: Ensure all cemeteries are closed on Oct. 29 – Nov. 4