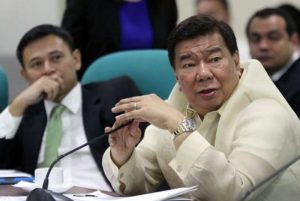 Senate Minority Leader Franklin Drilon on Monday filed a joint resolution that seeks to extend the franchise of ABS-CBN Corporation up to the end of 2022, citing the need for more time for both houses of Congress to review the application for renewal of the network’s franchise.

Drilon filed Senate Joint Resolution No. 11 amid uncertainties on the fate of the network when its 25-year franchise expires on March 30, 2020. Drilon, in his resolution, stressed that both the Senate and the House of Representatives need additional time to review, assess and determine whether or not ABS-CBN Broadcasting Corporation shall be granted the renewal of its franchise.

He noted that there are only 12 session days left before the next adjournment of Congress scheduled on March 14, 2020.

Drilon thus seeks to extend the validity of the franchise of ABS-CBN until December 31, 2022 in order to give Congress enough time to study the various bills seeking the renewal of the franchise granted to the network.

“On March 30, 2020, more than 11,000 families will go home jobless and millions of viewers will be affected if we do not act on this resolution immediately, I therefore urge for the immediate passage of this resolution,” Drilon said.

Republic Act 7966, enacted into law on March 30, 1995, grants the ABS-CBN Broadcasting Corporation a franchise “to construct, operate and maintain, for commercial purposes and in the public interest, television and radio broadcasting stations in and throughout the country.

The term of the franchise is for 25 years, which is set to expire on March 30, 2020. SJR 11 also states that 12 bills filed in the House of Representatives seeking to renew the franchise of ABS-CBN Broadcasting Corporation remain pending in the House Committee on Legislative Franchises.

Last February 10, about 50 days before the franchise expires, the Solicitor General filed a quo warranto petition at the Supreme Court to forfeit the legislative franchise of ABS-CBN Corporation and its subsidiary, ABS-CBN Convergence, for alleged violations of the terms and conditions of its franchise.

The resolution also cited Senate Resolution 322, which was filed by Senator Grace Poe, seeking to inquire, in aid of legislation, the operations of ABS-CBN Broadcasting Corporation to determine compliance with the terms and conditions of its franchise.

The former justice secretary earlier said that “it is the Congress, not the Supreme Court, that has jurisdiction to review compliance by ABS-CBN of the terms of the franchise granted by Congress, especially that there are pending bills seeking to renew its franchise.”