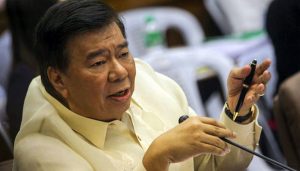 Senate Minority Leader Franklin Drilon urged the Department of Trade and Industry (DTI) to intensify efforts to woo the multinational companies planning to move out from China.

Drilon expressed alarm over reports that the Philippines is lagging behind in terms of efforts being done by the Southeast Asian countries to lure investors leaving China, including the biggest multinational firms from Japan and the United States.

“I do not see enough efforts being done, as compared with our neighboring countries such as Indonesia, Vietnam and Thailand, to win over the biggest companies moving out from China to relocate into the country,” Drilon said in a statement.

“This is an opportunity that we should seize immediately. The competition is tough. We cannot afford a laid-back attitude especially in this most trying time in our history as a nation,” he underscored.

“We should reach out to them. These investments will help our economy heavily battered by this pandemic,” he added.

Drilon said that the government should device “a more aggressive strategy” to woo these companies to relocate to the Philippines.

The Japanese Chamber of Commerce and Industry of the Philippines, Inc. (JCCIPI) earlier said that the Japanese manufacturing companies in China consider first Vietnam, Indonesia, and Thailand due to supply chain, resources, and raw material production.

Upon Drilon’s questioning during the Senate Committee of the Whole inquiry into the COVID-19 pandemic, Trade Secretary Ramon Lopez said there are some companies that will move into the country, but admitted that they are not the biggest companies.

These companies reportedly are more inclined to move their companies to Indonesia, Vietnam and Thailand.

“The reality is, we need investments more than ever for our economy to recover from this COVID-19 disease and to provide jobs and livelihood opportunities to Filipinos who lost jobs due to the pandemic,” Drilon said.

He noted that the Department of Labor and Employment (DOLE) estimated that around five million Filipinos would lose jobs due to the pandemic.

“Tell us the stumbling blocks we are facing here and if concerns legislation, Congress will fix it,” Drilon said.

Among the legislation that Drilon believes would help lure companies into the country are the amendments to the Public Service Act and the Retail Trade Act.

Drilon said the restrictive requirements of both laws impede foreign investments in the country.

The minority leader authored twin economic measures to amend the said laws. Senate Bill No. 13 proposes to limit the definition of public utility, while opening up other public services to the market.

Senate Bill No. 14, on the other hand, seeks to further relax foreign restrictions by removing investment categories and setting an across the board minimum paid up capital investment equivalent of US$200,000 in Philippine peso.

Drilon urged the government to include the twin economic measures as priority legislation.

Lastly, Drilon also asked the DTI never to downplay threats made by opposition legislators in the United States to look into the possibility of revoking the Generalized System of Preferences (GSP) extended to the Philippines over human rights issues.

Hontiveros: Include China in list of countries banned from entering PH