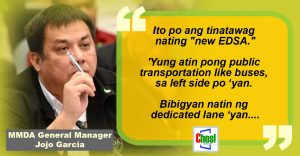 MANILA – The Department of Transportation (DOTr) and the Land Transportation Franchising and Regulatory Board (LTFRB) have partnered with the Metro Manila Development Authority (MMDA) in the conduct of an operational dry run and site inspection along EDSA today, 30 May 2020, in preparation for the gradual resumption of mass public transport operations.

The site inspection aims to ensure readiness of the transport sector and other concerned agencies, following the decision of President Rodrigo Roa Duterte to downgrade the modified enhanced community quarantine (MECQ) being enforced in the National Capital Region to a general community quarantine (GCQ).

Transport officials, led by DOTr Secretary Arthur Tugade, and various government agencies laid out their network plan and ironed out measures to be implemented along EDSA, which is expected to again accommodate volumes of motorists and commuters under a GCQ.

DOTr Secretary Arthur Tugade said the new traffic scheme in EDSA, which will be done in two phases, is a historic move that will transform the usual severely-congested highway.

The new scheme involves the creation of median bus lanes and rationalization of routes.

The MMDA Chairman said they will also put up bike lanes along EDSA, as proposed by the DOTr, to complement the Department’s “new normal” that promotes the use of non-motorized transport (NMT) as a measure to abate the COVID threat by maintaining physical distancing, deliver substantial environmental and health benefits, and achieve efficient use of road space.

After inspecting the proposed bus stops at Estrella, Guadalupe, Ortigas, and Quezon Avenue for the new bus network plan, a simulation of MRT-3 operations was done.

During the activity, the inspection team witnessed the swift sanitation process, which will be done regularly in just around 5 minutes between the arrival and departure times of trains at every half-loop.

Other safety measures train passengers can expect on the MRT line are the conduct of social distancing at the train entry/exit points, queues, and seats; provision of foot baths; and body temperature checks.

At the end of the activities, DOTr officials, together with MMDA GM Jojo Garcia and Asec. Celine Pialago, held a virtual press conference led by Secretary Tugade at the LTFRB office in Quezon City.

During the virtual press conference, Secretary Tugade announced that on his order, the operating speed of MRT-3 trains has been increased from 30 to 40 kilometers per hour (kph) in some areas— targetting to achieve 60kph by December. In addition, the number of MRT-3 trains has also been increased from 15 to 19, to further help accommodate the needs of the riding public, especially since the trains will be operating at a reduced capacity to observe physical distancing measures as part of measures to contain the spread of coronavirus disease 2019 (COVID-19).