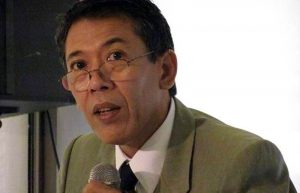 Veteran human rights lawyer Chel Diokno warned of serious problems in the new Human Security Act being deliberated in Congress, saying that moves to railroad the bill pose a danger to the basic rights and freedoms of Filipinos.

“From my analysis of Senate Bill No. 1083, we should be worried because the moves in Congress to railroad a new Anti-Terrorism law endanger our basic rights and freedoms,” Diokno said.

Diokno raised concerns with provisions on warrantless arrest and prolonged detention, the power to “designate”, and on “inciting to terrorism.”

“First, Senate Bill No. 1083 gives the Anti-Terrorism Council the power to authorize the warrantless arrest and prolonged detention of ‘suspected terrorists’ in violation of the Constitution,” Diokno explained.

Section 29 of SB 1083 entitled “Detention Without Judicial Warrant of Arrest” provides that police and military personnel who are duly authorized by the Anti-Terrorism Council may detain persons suspected of committing terrorist acts without court charges for a maximum of 24 days.

This provision, in Diokno’s view, violates the Constitution, which provides that only judges can issue warrants of arrest and that law enforcers can only make arrests without warrant in very limited circumstances. [1] According to Diokno, section 29 of SB 1083 “is effectively an ‘executive warrant’ not allowed by the Constitution.” It also “gives law enforcers a blanket license to make warrantless arrests even when the grounds therefor are not present,” he added.

Provision giving the ATC the power to “designate” individuals and groups usurps judicial power and prone to abuse. Section 25 of SB 1083 gives the Anti-Terrorism Council the power to “designate an individual, groups of persons, organization, or association, whether domestic or foreign, upon a finding of probable cause that the individual, groups of persons, organization, or association commit, or attempt to commit, or conspire in the commission of the acts defined and penalized under Sections 4, 5, 6, 7. 8, 9, 10, 11 and 12 of this Act.” This power is separate and distinct from the power of proscription given to the Court of Appeals to declare a group a ‘terrorist organization.’ Once a person or group is ‘designated’ by the ATC, SB 1083 provides that the assets of that person or group “shall be subject to the authority of the Anti-Money Laundering Council (AMLC) to freeze pursuant to Section 11 of Republic Act No. 10168.”

Diokno pointed out that “the power to designate a person or group a terrorist and to allow that person or group to be subjected to penal sanctions is part of the judicial power. This power cannot be given to the ATC without violating the Constitution.” “The power to ‘designate’ can easily be abused or misused,” Diokno added.

“It should be given only to the courts, not the ATC, since judges are impartial, objective, and independent of the executive branch.” Provision creating the crime of “inciting to terrorism” poses a danger to freedom of speech, expression and the press. “Section 9 of SB 1083 creates the crime of ‘inciting to terrorism’ similar to the crimes of “inciting to sedition” and “inciting to rebellion” in our Revised Penal Code. These crimes, however, are susceptible of broad application and can be used to stifle speech protected by the Constitution and to go after critics of the administration,” he warned.

“Kahit lahat tayo e nag-aalala pa rin dahil sa COVID, I hope we all stay vigilant,” Diokno said. “Let’s make sure this public health crisis is not being used as cover to railroad measures that would hurt our fellow Filipinos.”

Repatriation not all about funding — Bello

DILG says Anti-Terrorism Bill is not anti-human rights; only terrorists should be afraid of it