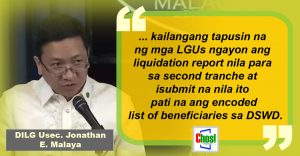 As the government prepares for the release the 2nd tranche of the cash aid under its Social Amelioration Program (SAP), the Department of the Interior and Local Government (DILG) said local government units (LGUs) have until today (May 28, 2020) to liquidate and submit the encoded list of beneficiaries for the second tranche to the Department of Social Welfare and Development (DSWD).

Based on reports from the DSWD, only 472 LGUs out of the 1,634 LGUs nationwide have so far submitted their liquidation reports to that agency as of May 26, 2020.

Malaya said that LGUs are also asked to accept returns or refunds of SAP cash aid by beneficiaries who received similar benefits from other government agencies such as 4Ps, DOLE’s CAMP, and SSS’ SBWS.

He said that by returning their SAP aid, these beneficiaries ensure that a left-out family who is also in need is given the emergency subsidy by the government. “Every unreturned amount means that a similar family in need is deprived of cash aid,” he said.

“All returned cash subsidies may be given to “left-out” families within their jurisdiction prior to liquidation, provided they are qualified to receive the SAP based on DSWD guidelines,” he said. For cash aid returned by beneficiaries after the liquidation by LGUs, Malaya said this shall be remitted to DSWD field offices.  “An official receipt must be issued to the beneficiaries as proof of refund,” he said.

Malaya said that he hopes that the payout of the 2nd tranche of SAP cash aid would be more efficient and systematic considering that LGUs must have already learned lessons and ironed out the kinks and lapses during the first payout.

“We recognize the huge difficulties encountered by LGUs in the SAP distribution of the first tranche.  It is quite understandable because this is the biggest financial cash aid for poor families in the country’s history,” he said.