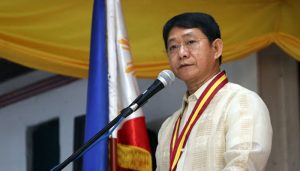 DILG Secretary Eduardo M. Año assured the left-out families that they will be included in the SAP so long as they are qualified under the guidelines of the DSWD.

“Wag po kayong mag-alala, tutulungan po kayo ng ating pamahalaan. We are giving the LGUs three (3) days to submit their initial list to us in DILG and to the DSWD which in turn will validate that list,” he said.

He said that “left-out or waitlisted households” are low-income families who are not recipients of any Conditional Cash Transfer and who were not included in the initial 18 million households who benefited in the 1st tranche of SAP financial assistance.

The LGUs have until May 21 to submit the names of their family-beneficiaries to the DILG and the DSWD.

He says that based on the report of the Department of Social Welfare and Development (DSWD), around five (5) million left-out households (aside from the initial 18 million families targeted) are low-income households and are qualified for the SAP aid.

Through a DILG Memorandum Circular, Año directed all the Local Chief Executives to immediately determine and identify these low-income households and submit to the DILG Regional Offices and the DSWD field offices the list of these left-out households in their locality on or before May 21, 2020.

He says that the said initial list shall be prepared by the barangays regardless of the length of stay in the locality and voter’s registration of the members of the household, and must be posted in conspicuous places in the community and on its social media platforms for public viewing and access.

The DILG Chief said that those with complaints about the initial list of the barangay may appeal their case with the Municipal Social Welfare and Development Office or with the mayor himself.

If no action is taken, the complainant may raise his concern with the DSWD. In the Memo Circular, he clarified that the said list “shall in no way be construed as the final list of beneficiaries which shall still be subject to further validation by the DSWD.”

The DILG has recently revealed that 23 barangay officials involved in graft and corrupt practices in the distribution of SAP assistance are now facing criminal charges.

Twelve criminal cases are filed against these barangay leaders with four more to be filed in the coming days.