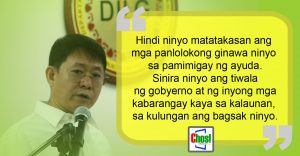 More people are coming forward to file complaints against their barangay officials on alleged anomalies in the Social Amelioration Program (SAP) pay-out as the Department of the Interior and Local Government (DILG) today announced that 134 barangay execs are now facing criminal charges before the Prosecutor’s Office of the Department of Justice (DOJ) for such irregularities.

DILG Secretary Eduardo M. Año said this represents a 320% increase in the number of barangay officials that are now facing criminal charges for alleged offenses in the distribution of the first tranche of SAP cash aid in a matter of four days.  Last May 20, there were only 42 barangay officials who were charged by the Philippine National Police-Criminal Investigation Group (PNP-CIDG).

He said that the PNP-CIDG will file nine more cases in the next few days, and is fast tracking the case build-up on 86 other cases.

The DILG Chief commended the PNP-CIDG for its expeditious handling of all complaints by the public on SAP anomalies. “Good job to the PNP-CIDG! Mabuhay kayo!,” he said.

He said a total of 318 complainants went to the PNP-CIDG and its regional field units to express their disgust and disappointment and to give statements over the wrongdoings of their barangay officials during the SAP distribution.

DILG Spokesperson and Undersecretary Jonathan Malaya thanked the Department of Justice and the Prosecutor General for ordering all provincial and city prosecutors to prioritize the preliminary investigation of cases against barangay officials allegedly involved in SAP anomalies so that criminal information may be filed with the courts.

“We are grateful to the DOJ and the Prosecutor General for prioritizing these cases.  We need to send a strong message to corrupt barangay officials that their criminal activities will not be tolerated,” he said.

Justice Secretary Menardo Guevarra and Prosecutor General Benedicto Malcontento recently instructed all prosecutors all over the country to set the preliminary investigations as soon as possible, to monitor progress of such cases which have taken on “a sinister and disgraceful character, considering that money intended for poor hungry people is unlawfully taken away from them.”

In Boac, Marinduque, a barangay chairman, two barangay kagawads and SK chairperson have been charged because of their alleged illegal collection of P50 processing fee from each SAP beneficiary.  A similar incident was reported in Binmaley, Pangasinan where the barangay captain and his cohort reportedly collected P1,000 from a complainant after receiving his SAP assistance.

In another barangay in Sta. Maria, Ilocos Sur, in Talisay City, and in Nasipit, Agusan del Norte, barangay officials are the subject of complaints after allegedly acting with deceit, dishonesty and false information by including the names of their relatives in the list of SAP beneficiaries although they were not qualified leaving out the poorest of the poor in the barangay who had no means of income.

Malaya said politics was sometimes at play in the giving out of SAP in some barangays particularly in Eastern Samar where a barangay captain reported that the mayor of his town allegedly deprived all of the residents in his barangay from receiving SAP because he is not a political supporter of the mayor.